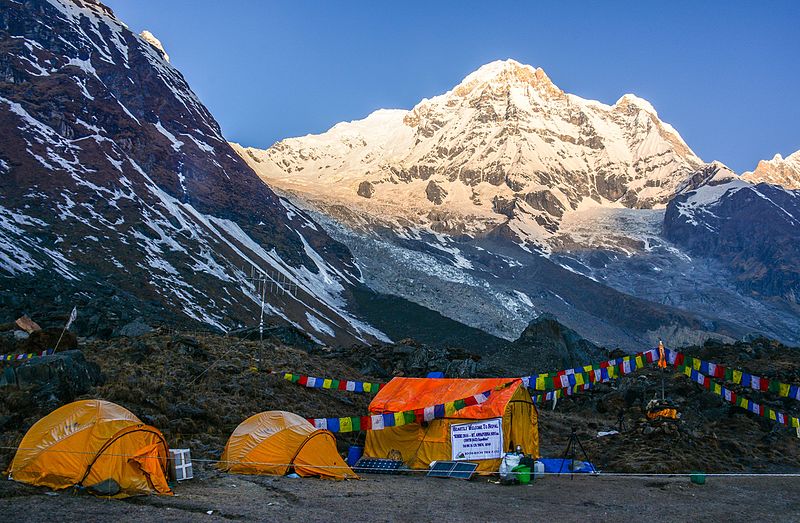 A country blessed with the snowy textile of mighty Himalayas- Nepal is truly a land of wonders. That is why Trekking in Nepal is considered as one of the most beautiful adventures in the world Annapurna Base Camp Trek is one of the well-known tourism destinations for travelers worldwide. Mount Annapurna at 8,091 meters of Nepal is among the 10th highest peak in the world. The journey to basecamp lies at an altitude of 4,130 meters.

There are many reasons following the ABC Trek which managed to capture the hearts and minds of many trekkers all across the globe. It is located along the buttes of the great himalayan ranges in the northern part of Nepal. The trek is best done during the spring and autumn seasons of Nepal, which lasts from March to May and September to December respectively.

The main reasons to absolutely adore the famed Annapurna Base Camp Trek happen to be the base camp itself. Every step of the way to Annapurna Base Camp go along with the gorgeous views and sights of the mighty Annapurna massif and its many neighboring peaks Machhapuchhare, Annapurna I, Gangapurna; the unclimbed summit and Annapurna South. From the very beginning of the trek from Pokhara, prominent mountain peaks like the Machhapuchhre and the Nilgiri along with the chain of the Annapurna Himal poise the distant horizon in a spectacular fashion.

Similarly, Poon Hill is one of the most famous vantage points of the region from where you can see the entire panorama of the Annapurna Himal laid out like a rich upholstery. Trekkers usually visit that point in the early dusk to witness the rays of the sun changing the dazzling white of the Himalayas into a cascade of molten ember.

The Annapurna Base Camp Trek, known as the Annapurna Sanctuary Trek, is considered as one of the most beautiful sanctuaries in the world- protecting not only the floral and faunal species of the land, but also its natural environment and the local ethnic culture. Standing at an altitude of 4,000 meters with its unique terrain, trekking through it presents you with a healthy Himalayan bionetwork that consists of lush woodlands merged with drier terrains.

Multiculturalism in Nepal is manifested in many forms like music, dances, costumes and festivals that are scattered all over the country. In fact, trekking in the Annapurna Base Camp Trek, are a perfect blend of all of the best aspects that the nation presents. Throughout the journey, you experience local ethnic Gurung and Magar cultures and encounter small chortens and gumbas at the foothills of Annapurna Himalayas. Gliding farmlands and terrace rice farms are also a common sight while trekking, and thick pine and bamboo forests, trails adorned with rhododendron shades make the adventure relaxing escape away from the bustling cities.

Unlike other high-altitude, the Annapurna Base Camp Trek is a comparatively moderate trip. However, the chance of suffering from High Altitude Sickness is near to being unlikely. The darkened rocks covered by thick onsets of snow at the base camp makes one feel like they are at an alien planet- such is the beauty and splendor of the final destination of the ABC Trek.