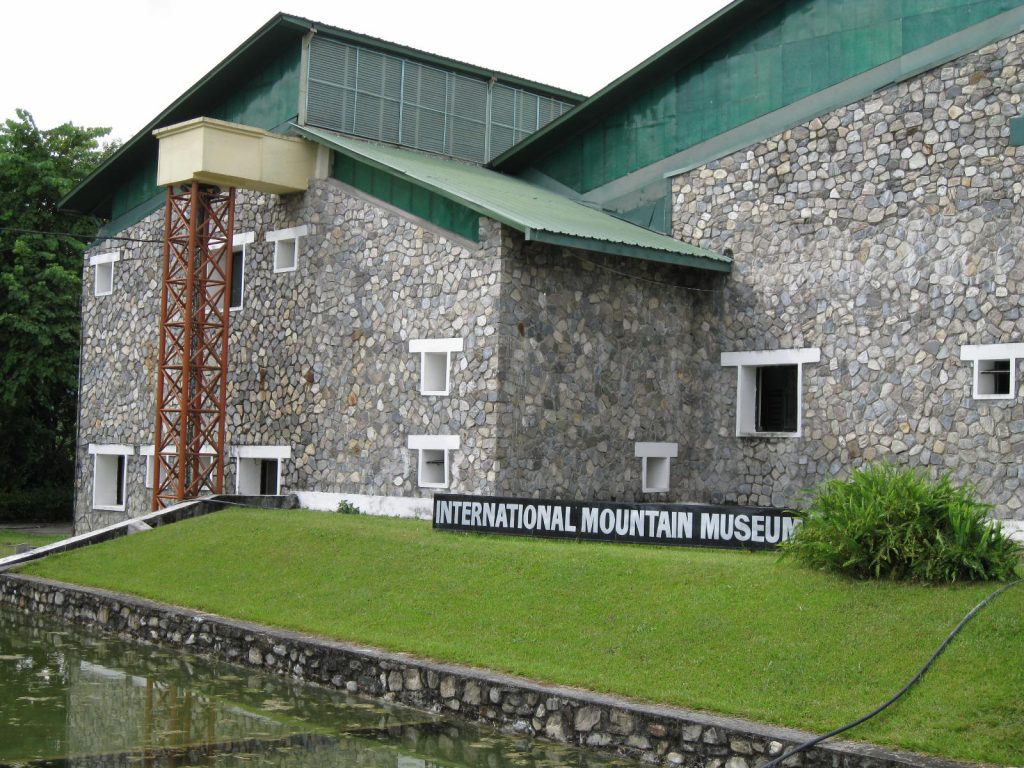 The International Museum is a museum located in Pokhara, Nepal. The museum is 2 miles south east of Lakeside Pokhara. It takes 10 m minutes to get there by car or is a 30-minute walk. The foundation stone of IMM was laid on 1 Dec, 1995. The soft opening of IMM took place on 29 May, 2002 where it was officially opened on 5 Feb, 2004. The museum contains three main exhibition halls: Hall of Great Himalayas, Hall of Fame and Hall of World Mountains.Inside the museum, there are exhibits on famous peaks, descriptions of famous mountaineers, the culture and lifestyle of mountain people, flora and fauna including geology, in an attempt to represent the traditional culture and values of the Nepalese people.

The International Mountain Museum in Pokhara Nepal houses a collection of artifacts and information related to life and mountain climbing above 12,000 feet.  More than 70,000 people visit the museum each year.  These people come to see the many exhibits, which include world famous peaks and the mountaineers that climbed the peaks, culture and lifestyle of the people who live on the mountains, biology of mountain plants and animals, and the geologic formations that created the mountains and their corresponding rock classes.

Mountains and mountaineering have a history of their own. Without preserving it, it will not be long before all the records and evidences will be lost forever. Nepal Mountaineering Association, established on 1 Nov 1973, initiated the establishment of International Mountain Museum in Pokhara. This expansive museum is devoted to the mountains of Nepal, the mountaineers who climbed them and the people who call them home.

It showcases indigenous habitants of the mountain regions of Nepal and the world. Their life style and culture are exposed impressively below this first basement hall, influencing the subconscious of the visitors that they are at the height to understand and know the information displayed just below them. For the close observation, when the visitors stare down the basement, they are ushered by the museum guides to the adjoining video hall to orient them about the people, culture and the mountains of Khumbu region.

After the 18 minutes video orientation, when visitors are fully prepared to understand the information, they see life size models of the mountain people of Nepal and the world. People of Nepal, Taiwan, Slovenia and Japan; their culture, costumes and artifacts amuse many visitors who are not from the mountain regions.

The hall of world mountains has 4 sections, mountain, geological, flora and fauna, and dedications.  It identifies the tallest mountains in the world and provides their height. It also provides information on their geological formations and classifications, mountain biology, and the mountaineers and summiteers that made the mountains famous. Another section identifies the 14 peaks over 26,247 feet. It also provides their pictures with information about summits and summit attempts. There are interactive monitors, and films that show how the Himalayas were formed. Fossils and different types of rocks are displayed too.

In addition, there are even some rare earth minerals on display. There is also a decent sized display of the different kinds of butterflies found int the areas. The natural history museum in Pokhara has a great butterfly display. It also identifies the Nepali people associated with the development of the of the IMM and their contributions.

The hall of mountain activities has 5 sections, equipment, ecology and environment, images, climate change, and touch screen sections. This portion of the museum focuses on climbers, equipment, climate, climate change, and provides a chronological display of the 26,247-foot peaks in the order they were summited. In addition, there is a side display of stamps with mountain pictures on them from around the world. Also, Pieces of the summiteers’ equipment are on display with their photograph. In addition to the primary equipment, there is a small section on the different types of knots and what they are used for.

It also has a large display of garbage removed from Mt. Everest and Lhotse to demonstrate the importance of not littering and how a little bit adds up. There are some very cool old photos in the lot. The most notable impact is the recession of Himalayan glaciers.  The section is divided into the effect of climate change on air, water, and ice.

This area has items on loan in it. It has photographs of Dr. Tony Hagen and others loaned by ICIMOD.  It also has a prayer room and library. There is a replica of a Buddhist prayer room and is always open for people to enter and pray. The room that reflects the openness of people living in the Himalayas. There is library which has a moderate selection of books on mountains, biology, people and mountaineering. The Mt. Manaslu model is outside the museum just before the front door.  It is not to scale, but you can play on it. The yak model isn’t part of the temporary display.  It is outside located next to the foot path.