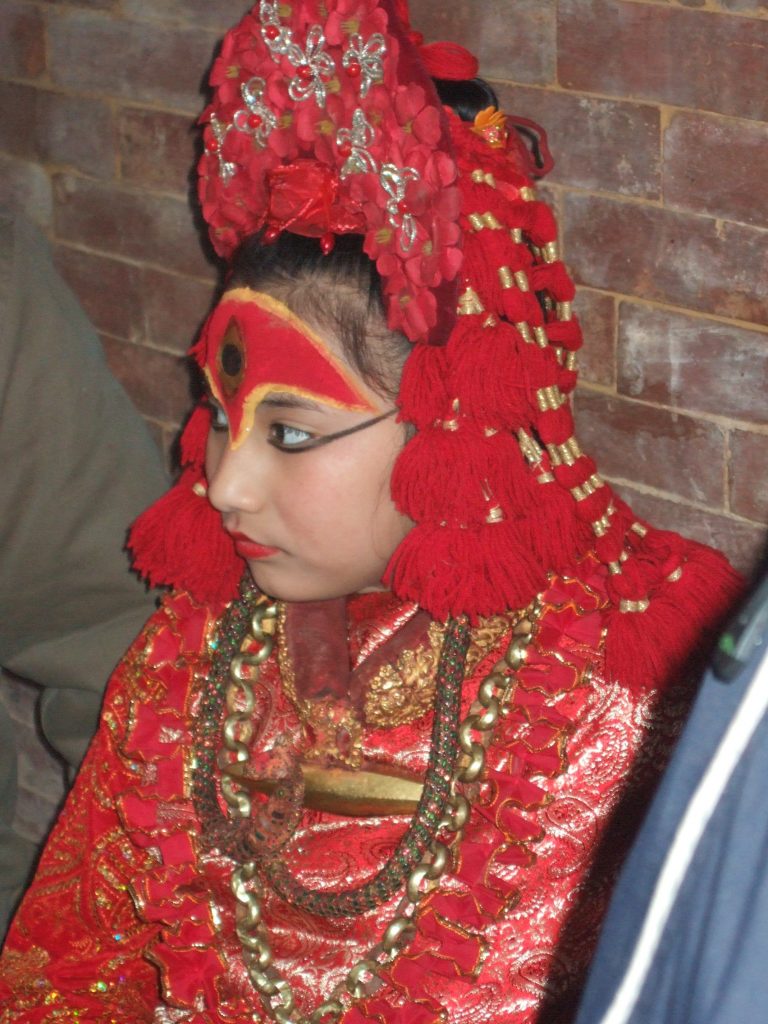 The Kumari, living Goddess is worshipped by Hindu and Buddhists since Malla Era. The precise meaning of Kumari means Virgin. Kumaris are young pre-pubescent girls who is regarded as the human embodiment of Goddess Kali and Taleju for power and protection.

There was only one Malla kingdom in the Kathmandu valley ruled from Bhaktapur in the early days. After fifteen century, during King Yaksha Malla reign, he divided his kingdom to his sons and within a decade they became totally separate kingdoms. Then, the temples of Talejus’ were built in Kathmandu and Patan as well. Since the establishment of the Taleju cult in the three kingdoms, the three living Kumaris’ in the three cities of Bhaktapur, Kathmandu and Patan are introduced. The most popular and powerful Kumari is The Royal Kumari of Kathmandu.

The origin of Kumari is portrayed by several tales. Among them, tales concerning the King and Goddess Taleju are widespread and believed by many communities. It says, the King Triloya Malla used to drill tantrism and with that help he had the direct contact with the goddess Taleju. The goddess Taleju used to come to the palace in the human form and used to play tripase (dice) every night and discussed the well being of the country. Unfortunately, one night Trailokya made sexual advances towards the Goddess and infuriated her. This annoyed the Goddess and she stopped coming to the palace. The king apologized and pleaded Goddess for her return. Finally, the goddess agreed to appear in the body of the virgin girl from the Newar Shakya and Bajracharya caste. Since then, the cult of Kumari Goddess was established. 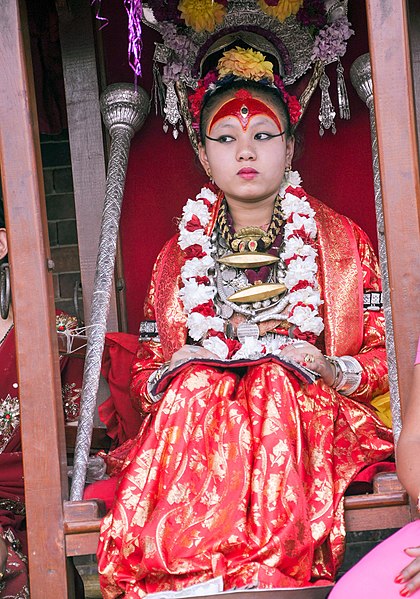 The Newar Shakya and Bajracharya caste are Buddhists. The girl who will be designated as the Goddess Kumari is born in a Buddhist family and becomes a Hindu deity. So, Nepal is considered to be the melting poing of Buddhism and Hinduism.

The process for selection of Kumari is very vast and undergoes many criteria. Five senior Buddhist Bajracharya, Chief Royal Priest, Priest of Taleju and royal astrologer administers the selection ritual of Kumari. The formal entitlement of the Kumari of Kathmandu requires a girl from the shakya caste with a sound health with no evidence of serious illness, especially smallpox, skin without blemish, no bad body odor, pre-menstrual and no loss of teeth, black hair and eyes, dainty hands and feet, small and well- recessed sexual organs, set of twenty teeth. Once the young girls pass the basic requirement, they go through the trial of the thirty perfections as a neck like a conch shell, a body like a banyan tree, eyelashes like a cow, highs like a deer, chest like a lion, voice soft and clear as a ducks.

Through the process, the girl has to show calm and fearlessness and her horoscope is checked to match the king’s horoscope.

After the selection, there will be entire changes in girls life. She will leave her palace only for ceremonial purpose. Every one dreams to be Gods once in their life but it is not easy to sustain the life of a living goddess. Kumari Goddess is selected at very young age from as small to three years. After being selected as Kumari, the children leave their parents and birth house until another living goddess replaces her. 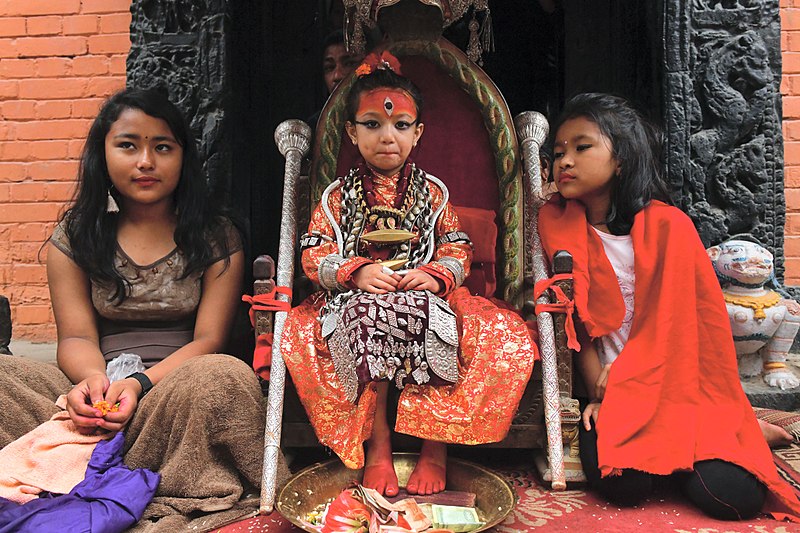 A recent discussion and pressure from Human rights and Children rights activists of Nepal on the Kumari system have changed to some extent. Kumaris weren’t given proper education and knowledge about social life and surrounding. Nowadays, Kumari in the Kumari house is provided with a personal tutor and education. There is even service of the Internet, books, and magazines. The Kumari attends national exams inside the palace under supervision. There is a step towards a better future of Kumari Goddess after they lose the title of living goddess.

Trishna Shakya is the current Kumari of Kathmandu who took over from Matina Shakya on 27 September 2017. Trishna was just three years old when she was declared the new Kumari. She leaves behind her parents and a twin younger brother to embark on the journey of living Goddess.