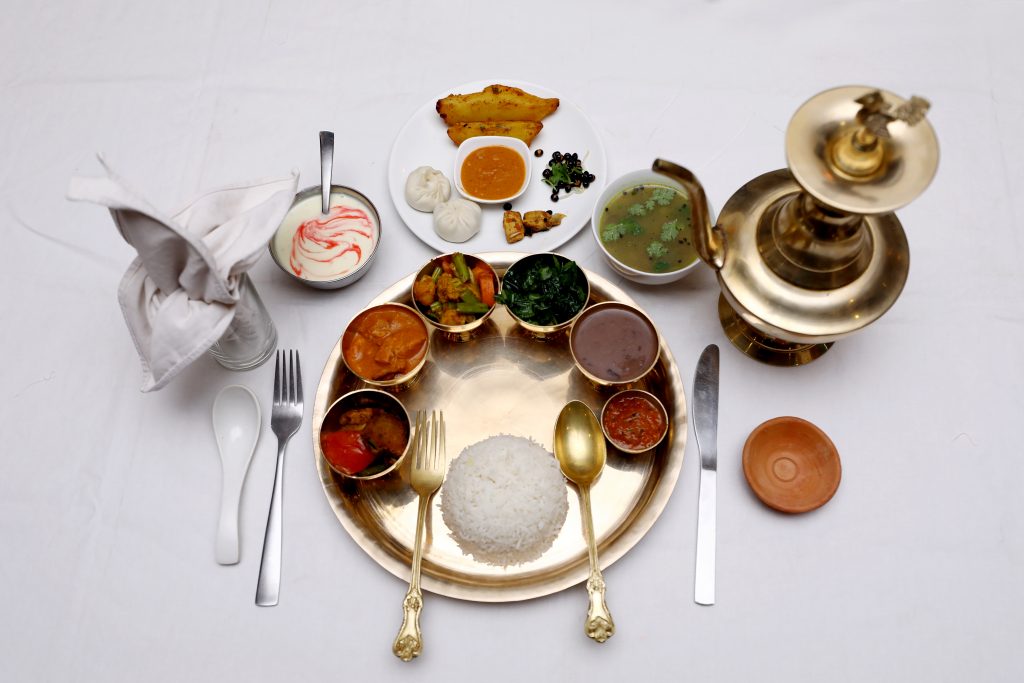 The Thakali are the people originated from the Thak Khola region of the Mustang District in Nepal. Thakali meal consists of locally grown buckwheat, barley, millet, rice, maize and dal. A kind of dal is also made from the dried, ground buckwheat leaves. Also, other special pickles, gundruk, and ghee are also included. Thakali meal is collectively made up of these all food items.

Kachhyamba, a buckwheat finger chips, is a popular snack food. It is cooked in hot water mixed with little ghee. After water is boiled, add a buckwheat flour and stir it until it cooks into a thick gruel (Dhedo). After it cools down, mix it up with your fingers in a bowl then roll the stiff dough out in the palm of your hand to form finger size pieces. After cooling, fry them in hot oil, then serve with a hot tomato-and-timur relish.

Long grain white basmati is boiled and served slightly fluffy. At first, wash the rice at least twice in cold water before cooking. Save the second starchy rinse water to thicken the lentil soup. And use the appropriate amount of water to cook.

Initially, wash the lentils and boil with a little ghee and turmeric. For thickening, cook them using the starchy second rinse rice water.  People mostly use pressure cooker nowadays. After cooking foe a while, transfer transfer the lentils to an iron cooking pot and mash into a watery paste. By using an iron pot, the dal’s preferred slightly green color comes out. Also, add salt to taste, and a little shredded fresh ginger (aduwa).

For further procedure, aromatic jimbu is added just before serving. Heat some ghee in a metal ladle and quickly fry a small sprinkling of dried jimbu in it. Then raise the lid from the simmering lentils and jam the ladle into the soup in a flash. The explosive noise is called “jhoin!” in Nepali, and gives it a delicious aroma.

Timur is the signature spice of Thakali food, though doesn’t grow in Thak Khola. It is the dried outer pod of the berry of a tree. When crushed and added to relishes, it exudes a pungent odor and tangy flavor that is the hallmark of Thakali khana. The dried berries are dark brown in color. Timur is widely used to flavor vegetables, soups and gravies.

Potatoes are pilled off and cooked until 90%(they need to be a bit solid, not falling apart). It is let to cool and sliced in finger size. It is then fried in heated oil after adding little methi (fenugreek) and besar (turmeric); brown lightly.  Drop the potato slices into the hot spicy oil, add a little chap (a chili and timur mix; below), finish cooking and serve hot.

The broadleaf, “rayo ko sag“, is one of the most popular spinach varieties in Nepal. . Mustard greens (tori ko sag) are also good. Heat some oil at first and add a little fenugreek and turmeric, and brown it lightly. Meanwhile, wash and drain the spinach, then add it to the spiced hot oil in the cooking pan. It’s important that the oil is not too hot. Add salt to taste, and stir the spinach occasionally while it cooks. Don’t overcook it, and don’t put a lid on it. It is a local way to cook spinach in villages.

Before cooking the meat, fry some chopped onion in hot oil until brown. But then, I’m told, some Thakali cooks do not use onions. Your choice. Now, chop the meat into finger-licking size chunks and add the pieces to the hot oil (with the onions, if you use them) and fry lightly in some salt, chili powder, turmeric, ginger and cumin powder (jira) to taste. Add water if you want gravy with the meat. (Gravy is called jal.)

If you are using a marketable boiler chicken, add a little garlic paste and some tomato to flavor and thicken the sauce. For goat meat, the cooking is the same but garlic is used mostly in winter but if you add the garlic at the wrong time (too late), the meat may have a raw garlic taste.

For vegetarians; Cook carrots, cauliflower, peas, and green beans using basically the same spices as for meat (but go light on the turmeric).

To make this delicious but slightly intoxicating dessert you need some ferment starter (marcha).
Thakalis prefer a white rice that is slightly sticky (but not as sticky as Laotian or Cambodian sticky rice).  At first, wash the rice and throw out the first wash water. Then wash it again, this time stir-squeezing it a little with your hands to squeeze out more starch. And Boil the rice. Don’t use any salt and do not overcook.

After its cooked, put it into a glass or porcelain bowl and stir in the starter and let it cool. Cover lightly and leave in a warm place for 2 to 3 days to ferment. Warm a little ghee and add a fermented rice and sugar to taste and fry. It is served in small cups with dessert spoons.

Chap is one of the most distinctive flavors in Thakali cooking. It has only three ingredients: red cayenne chili powder (kursani), timur, and salt. It is used to enhances the flavor. Fresh tomato relish (golbeda ko achhar) is served along to boost the appetite.

Fry small tomatoes (with skins on) in a pan with only enough oil to prevent sticking. Let it cool. If the skins fall off the tomatoes, leave them in the mix. Blend the tomatoes with chap (chili powder, timur and salt) to taste. It is now served as a small dollop on the side of the plate of rice.

Traditionally, the tomatoes are mashed on a silauta, a flat grinding stone (mortar) with a pestle. Nowadays, most modern cooks use an electric blender. Sometimes, chatni is served instead of chap.

According to one Thakali cook, chatni (chutney) comes from the Nepali word chatanee meaning ‘taste on the tongue’. As a relish it is prepared and served fresh. An achhar, on the other hand, is prepared ahead of time and preserved in a glass jar until served. Fresh white radish pickle (mula ko achhar)